First I'm going to talk about the likely disconcerting second part of the title - last blog post. "Oh no! They're done writing?" You may say. However, it is time to move on to a different part of my travelling career. Editing my horribly type voice texts And then redding them up so they can be posted online is actually very time-consuming.

Instead, I've come to the realisation that I can simply record videos to post later, and since more people watch YouTube videos in general then read a blog, it just makes the most sense for me to start vlogging instead. After all, that's how nearly everybody gets discovered for their time and talent these days.

And so, I will be creating a new YouTube channel dedicated to my blog. I will have a few uploads here and there from other journeys I have gone on, and eventually, I will begin to populate my vlog with new and improved material, sharing content between this website and there. If you enjoy reading about my journeys, you'll now be able to watch them instead!

And so, the last Scandinavian country I had left to visit was Norway. I spent some time travelling in both Oslo and in Svalbard, an Archipelago above Norway that is owned by Norway. I generally speaking was a huge tourist. Look out for Big World Small Feet on Vlog format!
Posted by Big World Small Feet at 9:24 PM No comments:

Ourika valley lays tucked away in mid-Morocco. After a whirlwind of changing buses and directions, I found my way to this arid strip of land and water. Lots of surprises were strewn about along the way.

For our first stop, we got to see exactly how berber pottery is made. They have a hand-spun stick on which two-day old clay of dough consistency was placed. The spinning wheel was foot operated, and the clay formed by hand and cut using string. Afterwards, 100 kilograms of wood per day fuelled the wood kiln, in which 300 pieces per day were baked for four hours to harden. Herbs and spices such as alfalfa and saffron provided the natural dye for the intricate designs as well. In the shop, various fossils and geodes from the Atlas mountains (housing the second highest mountain in Africa) also sat on display.

On the way down into the valley, we stopped for photos along the intersection between the Ourika river and the Atlas mountains. A quick stretch break, and we were off to an Argan Souad to learn how their precious oils are made by hand in a female cooperative (put in place to give mothers jobs because family obligations prevent moving to the city). The Argan tree fruit, also consumed by tree-climbing goats (link here) are hand crushed, ground, and milled to extract oil with water, and some Argan almonds are roasted to make "berber nutella".

We then saw a Berber house and mill wheel run by waterflow, which grounds grains archaically into flour. A woman cooked a tagine over a fire, and the valley brought water in next to her for dishwashing. In a spare room, there were pots full of oil and flour, and a hanging cask filled with milk to shake for 40 minutes at a time for making buttermilk.
Lots of bits and pieces used for various occasions such as marriages also laid about.

I became friends with the Germans on the tour, and we discussed visiting each other at some point if time allows. The three of them were working in finance, business, and industry respectively. We then went off to the Ourika Valley's starting point: a huge waterfall.

Setti Fatma was the waterfall we went to, and arrived at after an hour hike uphill. The waterfall itself was beautiful and gave way to many beautiful sights the higher up the mountainside I hiked.

From here, my new friends and I watched monkeys run across logs abreast the river, listened to musicians playing their one string fiddle, and on the way back to town, even saw a man chasing downhill after his donkey. African animals are definitely independent thinkers.

After a long travel, and much anxiety from street vendors, i haggled a cheap taxi and got to the airport for my flight back to London. I got home at three in the morning and promptly crashed. Good night, and see you all again soon!

Posted by Big World Small Feet at 9:23 PM No comments:

Out of the Desert

We woke up to the sound of drums and the sun rising over the Saharan mountains. Jam bread, strong tea, and warm coffee greeted us on the cold morning, and we once again braced our camels to head back to the main road.

I soaked in the beauty of the surrounding landscape, knowing that if my camel took off and I plummeted to the ground, I would die a happy person. Just as we hit the halfway point, we saw three dogs barking and chasing after two mortified camels, and two berber men in turn running after the camels. It was comedy gold that I had to miss recording so as to not fall off of camelback. We reached the road, tipped the berbers, wished them farewell, and hit the road for Casbah on Hill, Ourzazate.

This berber town of migrants was built in the 17th century from traded over Yemenese adobe clay and straw.
The Berbers have no written language, so all of their thoughts were expressed in artwork. Although the high walls were once built to fend off attackers, the city is no longer dangerous- caravans pass through here safely for gold and silver trade under government administration. In 1956 the last official governor ruler helped them out in this regard. Lots of movies are sho in this town, and our tour guide Mohamed was an extra soldier and interpreter in Cleopatra. Of all the labguages he speaks, he prefers English because of listening to hip hop.

Because of what it is, anyone could buy land for for 300€ before movies were shot here. Now the land cost is closer to 40,000€. Jean Claude Van Damme shot a movie here and the people gave him whatever he and his cast needed. However, Moroccans would blast music to hustle them for money before police would cone, since begging was otherwise illegal.

Concerning these houses, people dig deeper cellars to stay cool in 50C summers. Modern houses have come in since 1917 for new people. They continue to use straw to prevent cracks in adobe during the adobe heat.

We were then shown various Ghilim and glawa carpets done by one woman to close off doors in tents. We had tea and browsed wares, and I walked away with a less-than-cheap tea set and oil lamp. We had lunch, i finally managed to withdraw money, and I saw more of the beautiful Moroccan landscape as I held deep conversation with another traveler all the way back down to Marrakech.

When I returned, I actually managed to overcome my anxieties of unfamiliarity and find my way back to my Riad without getting haggles and without getting lost. I left for my next Riad, unpacked, had more Moroccan Mint Tea, and left for a familiar sight: Northern Europeans.

Chez Brahim is along Derb Dabachi, a busy off-street filled with both motorcycles and pedestrians everywhere. The restaurant itself is quaint, artsy, and extremely Berber. Here, bread and chili sauce are served together as an appetizer and garam masala replaces pepper as a table condiment (as it should be). I had some veggie berber tagine, tipped my hat to the restaurant's prompt service (and similarity to the actual berbers I stayed with), and headed home to rest up for an action-packed day ahead.

Next up: Ourika Valley!

Posted by Big World Small Feet at 9:22 PM No comments:

So, remember how in a previous blog post I mentioned that my parents had two honeymoons? And that one of them was to St. Thomas? Well, lit... 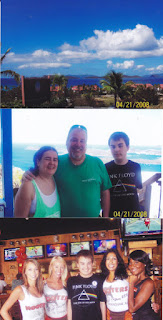